Defying Gravity and Time: George Baselitz at the Hirshorn

Yesterday I visited George Baselitz’ (well-known German artist) massive retrospective at Hirshorn Museum in Washington, D.C. The exhibit takes up the entire middle floor, exterior circle of the Museum and traces his initial efforts, initially declared pornographic by German officials in the 1950s all the way up to his more ephemeral late works. Interestingly, much of his work is initiated from photographic sources that he translates into gestural, and mostly very raw expressionistic large-scale paintings. One cannot help but feel overwhelmed by the brutality he exhibits in much of his mark making. If one is looking for something subtle, well it perhaps can be found in his very selective color choices.

Two questions for me going into this show were, how many upside down paintings can one view without it getting tired and furthermore, is that all they have going for them? I wonder how many viewers look at his work and want to see them right side up. For me, I had no such desire. It does seem odd to me that his efforts in sculpture carry his signature brutal approach, but they stand erect with normal gravitational forces at play. The sculptures are monumental and heavy. 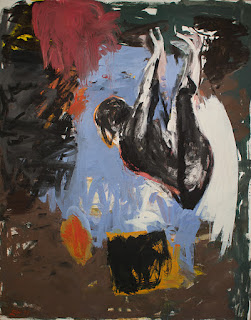 One painting that was particularly powerful was The Gleaner ( Die Ährenleserin ) painted in 1978. According to Cornelia Lauf, “…Georg Baselitz’s monumental, somber work was painted during a decade of well-being in Germany, when the generation of the wirtschaftswunder—the economic miracle—was interrupted in its relentless quest for stable prosperity only by the occasional political scandal or terrorist attack.” (https://www.guggenheim.org/artwork/381 accessed 6/28/2018. The figure, inverted in a strange space of gestural brushwork and shapes seemed hauntingly familiar; Millet drew and painted a similar figure in the nineteenth-century.

Since gleaning has precedence in European history, biblical references, and traces back through art history to Millet’s interpretation, it is not too far fetched to think that the subject is a potent one given today’s climate in the United States where a substantial portion of “middle America” has gravitated toward a political figure determined to reset the perceived scales of unfairness.

Like Germany after it recovered from World War II, the United States is now in a period of great economic prosperity; and yet, substantial portions of our population have only part-time employment opportunities at low wages without benefits and basic health care. They, like the figure in Baselitz’ painting, are suspended in a place that is difficult to navigate and understand; they too, accept what is leftover. Baselitz’ painting causes me to consider survival in a situation that is potentially impossible and perilous at best.

Of course, I have seen Baselitz’ work from time to time for a couple of decades, now. So the upside down factor is something I’m familiar with. By the end of this extensive show, I’ll have to admit that “upside down” wasn’t even playing in my thought processes. Gleaning may be similar; if one has been gleaning all of one’s life, you simply don’t think about it anymore.